Home / How to tint car windows (made easy)

How to tint car windows (made easy)

First and foremost, what is car tinting and why is it important? The process of tinting is one in which the glass of all the windows (or just the back or front) are darkened by a film which makes it impossible for an outsider to know what’s going on in the car. It does the work of a blind and functions mostly as a curtain to the outside world. However, you can see perfectly fine from inside the car. That is the magic of it.

It sort of works like a two-way mirror. You can look from one side but not both. That is the main reason of the tint: to stop people from looking inside and knowing a person’s personal matters.  There are many reasons as to why a person would want to tint the windows of his or her car. Over the time, it has been proven to be undeniably useful and has many important benefits such as:

1) It keeps the car a lot cooler than a car with non-tinted windows. Since the windows are black, the amount of heat getting in is lessened significantly and the interior of the car is kept cool. This is a benefit that car drivers are extremely grateful for in the hot summer months.

2) Some people love the color black, and they buy a black car but the windows might not be matching which leaves them unsatisfied. They tint the windows black just for the sake of an all black matching car.

3) It gives you privacy, busy office workers sometimes don’t even have time to wear their clothes properly and have to get dressed in the car. This is greatly useful in situations like these. With untinted cars, there is no privacy in any way whatsoever. It gives you a sense of security and ease. You don’t have to be self-conscious in a traffic jam or deal with the rude stares of unwanted people while you’re waiting for the signal.

4) It also provides a reasonable amount of protection to the car’s interior and keeps it new for a longer time because there is no heat to damage it and the sun’s rays cannot reach it so they do not harm it. 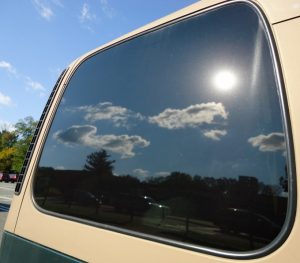 THE STEPS TO TINTING YOUR CAR WINDOWS

So, whether you want to tint the windows of your car just for fun or for privacy concerns or basically any other reason at all, it can be quite a nuisance getting it tinted by a company. Sometimes they take way too long, and when they do a great job at it, the cost is unreasonable.

So, it’s better to do it yourself, you must be thinking it’s too hard or should be done professionally because you think you’ll mess it up. Have no worries! We are here to guide you through easy steps of how to tint your car. Here they are:

The film can easily be bought from any car shop. There are many types of film available nowadays due to increased demand for tinted windows such as metallic black, reflecting film or mirrored. Firstly after buying it, cut the film of your choice to accommodate it to the shape of the window you plan on starting with. Buy a good applicant solution beforehand. Make sure the windows were cleaned properly and thoroughly before starting. (to avoid air bubbles and damage).

Cut the film to the exact size of the window using a razor knife. Leave an extra inch to each side, to make sure the whole window is being covered.

Make sure the straight bottom edge is being extended to a quarter of an inch below the top of the casket that is inside. Trim the vertical edges of the film with the razor knife and after lowering the window to 5.0 cm, trim the film so that it fits the shape of the top part of the window. Take extra care not to damage the glass as this part can be a bit tricky.

4) Application of the tint:

Position the film to the glass of the window with extreme care, the side of the film with the adhesive on it should be facing the glass. Start at the bottom of the window working your way slowly and gradually to the top.

Make sure there are no air bubbles. The window should be slightly rolled down. You can use a squeegee for applying the film firmly to the window. Use a lot of pressure so that the film and the glass have no space between them.

There should be no bubbles as that will cause it to come undone later on. Roll the window up while applying the film to the bottom of the window. Remove the water and soap by pushing it towards the end of the window.

These are the easy steps of applying a car tint to your car windows yourself in a comfortable way. Make sure the film has been applied properly at all places, if there are even little signs of air bubbles, don’t be too hasty and start over.

It is better to be safe than sorry. Once the work is done properly, you will not regret it. Since it requires a bit of an effort, go the extra mile. First timers might find it a bit difficult but that’s okay. You can try again and again until you achieve the desired effect of your own choice. We hope you found our guide useful and will be able to follow the steps with no reluctance.